Tickets now on sale for our 40th Anniversary Gala Concert 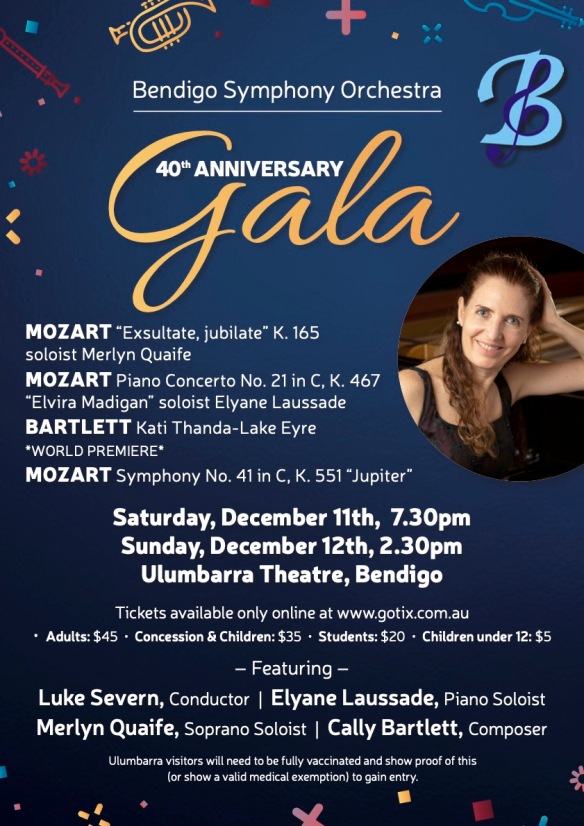 A 40th anniversary, a world premier and internationally famous soloists play and sing with the Bendigo Symphony Orchestra with conductor, cellist,  and composer Luke Severn.

This concert is an exciting return to performance for BSO and all the soloists after a long break due to COVID 19.

This is a 40th anniversary concert for the orchestra

Elyane Laussade is a superb concert pianist who will perform Mozart piano concerto No. 21 in C, K. 467 “Elvira Madigan”

Merlyn Quaife is a distinguished soprano and performer of great versatility, encompassing opera, oratorio, lieder, chamber music and contemporary music to great acclaim throughout Australia, Europe and the USA. Merlyn will sing the much loved Exsultate, jubilate.

This concert will also feature the World Premier of Kati Thanda-Lake Eyre a work composed by another leading Bendigo musician, composer, teacher and conductor, Cally Bartlett. This work was composed during “lock down” and reflects the peace of Kati Thanda – Lake Eyre.

The BSO was founded in 1981 as a result of the Music 81 Project of the Victorian Government, and was the successor of the Bendigo Concert Orchestra.
The orchestra occupies a key space in the musical life of the City of Greater Bendigo, with the Mayor of Bendigo as Patron.

The BSO is an amateur community Orchestra which rehearses weekly during school term times, and performs at least 3 public concerts per year.  Please contact us if you are interested in joining; we are currently welcoming new string players and brass players.

Concert cellist, composer, and musical director, Luke Severn possesses a musical voice of great versatility and passion. Noted for his expressive performances and dynamic and engaging personality he is emerging as an artistic tour de force in the Australian musical landscape.

BSO has received support from the following organisations:

The Bendigo Symphony Orchestra Inc. is registered with the Australian Charities and Not-for-profits Commission